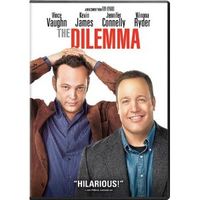 Actor, director, and producer Ron Howard joins Stewart to promote his new film The Dilemma.  Howard has been in the business for 52 years.  OMG.  That's right.  Fifty-two years.  He'd been in the business a year before he got hired as Opie Taylor (at age 6) on the Andy Griffith Show.  Wow.

Hey remember the theme song to the Andy Griffith Show?  The one that was whistled?  Catchy tune, isn't it? Now it's going to be stuck in your head.  Yeah, you're welcome!

Stewart and Howard have a interesting (and funny) conversation about Howard's days as Opie Taylor and about the creative process at-large.

The Dilemma is a comedy starring Vince Vaughn, Kevin James, Academy Award winner Jennifer Connelly and shoplifter Winona Ryder.  I usually like Howard's work, but I'm not so sure about seeing this film.