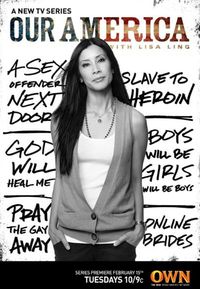 Jon Stewart interviews Lisa Ling about her new show, Our America, which will air on the Oprah Winfrey Network.

Even back during her days on The View, Ling has been presenting thoughtful, yet (perhaps) controversial topics to an audience who may not otherwise have such careful accounts.   I've always been a fan of her journalism.  She's articulate and informed. (Thank goodness she left The View!)

Ling states that her new series is "a window into different aspects of America."  The first episode covers transgendered people, one as young as the age of six.  Another episode tells the story of a colony of sex offenders in Florida.  If her interview with Stewart reveals anything, it's that her series will continue Ling's nuanced style of journalism.