Books Featured on The Daily Show
Home Posts Archives
Kristin Wiig can be my bridesmaid any day!
Song from the Tony-winning musical, The Book of Mormon 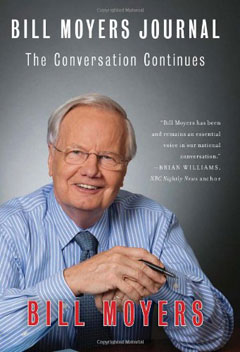 Bill Moyers is one of my heros. I have loved him from when I saw his interviews with Joseph Campbell. His voice, his questions, his conversations are something that are so desperately needed in modern society today - to try to bring some rational context to the mix.

So, when I saw he had a new book out of these conversations, I was quite excited. But then, when I found out the first interview was with Jon himself, I was over the moon!

For those of you who are Daily Show fan girls and fan boys like me, have I got a treat for you - the Table of Contents and first chapter of Moyers' book. I found it over on Athena Learning when I was searching for a postable Table of Contents (the publisher only includes SOME of the interviewee .. dammit, give me the full freakin' list!). So, I saved a copy and am posting it here.

Moyers: So many people seem to want just what you did, somebody to cut through the talking points and get our politicians to talk candidly and frankly.

Stewart: Not that many people. You’ve seen our ratings. Some people want it. A couple of people download it from iTunes. The conversation that the Senate and the House are having with the president is very similar to the conversation that McCain and I were having, which was two people talking over each other and nobody really addressing the underlying issues of what kind of country do we want to be, moving forward in this? And it’s not about being a pacifist or suggesting that you can never have a military solution to things. It’s just that it appears that this is not the smart way to fight this threat.

Moyers: Your persistence and his (McCain's) inability to answer without the talking points did get to the truth—that there’s a contradiction to what’s going on in that war that they can’t talk about.

Stewart: That’s right. There is an enormous contradiction, and it is readily apparent if you just walk through a simple sort of logic and simple rational points. But the thing that they don’t realize is that everyone wants them to come from beyond that contradiction so that we can all fix it. Nobody is saying, “We don’t have a problem.” Nobody is saying that “9/11 didn’t happen.” What they’re saying is, “We’re not a fragile country. Trust us to have this conversation, so that we can do this in the right way, in a more effective way.”

OMG, if it's possible, I'm a little more in love w/ both Stewart and Moyers after reading it.