Joanna Brooks, author of the book The Book of Mormon Girl, was interviewed on The Daily Show last week. After her interview, she posted an "inside edition" account of her time with Jon and The Daily Show crew. 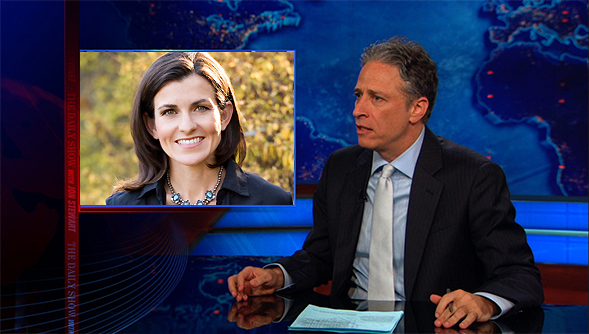 After reading it, I love Jon even more and am super-excited to read Brooks' book.

He is also very intense, but in a powerfully good, generous, funny, and deeply intelligent way.  He was in the green room exactly the mensch you see on your television screen.

He gives us a huge hello, shakes hands with everyone—me last.

“I bring greetings from the Mormon feminists of America,” I said, “who adore you, and they send these pioneer bonnets as a token of their adoration!”

And I handed him the bonnets made by feministmormonhouswives.org founder Lisa in festive star of David and Hannukah fabrics–with ironed on Feminist Mormon Housewives labels–and he chuckled and smiled and examined them with appreciation.  And then I handed him the bonnet made in a fetching blue wool by Reese Dixon.  “This one,” I said, “My friend Tresa made to match your handsome suit.”

And then he spied the bad Mormon dessert on the table.

I started fishing around to set him up with a spoon and a plate and he took a big bite of the Jello-Cool-Whip concoction and says, “That’s not bad at all!  I like that!”

Someone jokes about the Jello-Cool-Whip Mormon thing, and David vocalized his usual complaints about the yucky goyishness of the food, to which Mr. Stewart replied, “And you think kasha varnishkas are any better?”

Brooks mentions she took several pictures - I really wish she had posted some - especially of any of Jon in a pioneer bonnet.

Make sure you check out Brooks' blog, Ask Mormon Girl, and her Twitter stream.